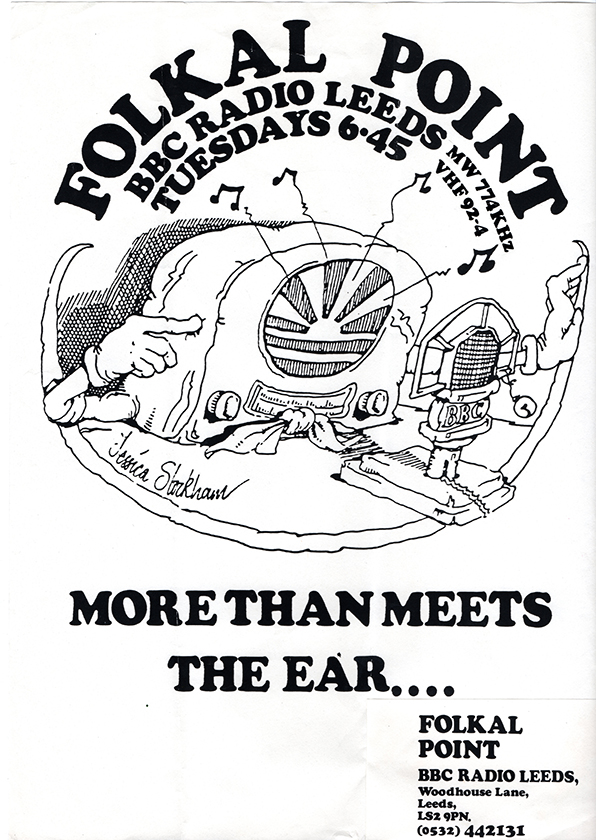 In 1985 I got the job of presenting Folkal Point on Radio Leeds. I was ably assisted by Tim Crowther and Phil Wallace and it was a time of smoky offices, razor blades, chinagraph pencils, tape and magnets. I was a child of the 50s and radio was everything. I was so excited to be placed in a position where I could interview people, (I was, and always will be, a fan), play music that people liked and generally live a fantasy. In my time at Leeds, two years in total, I interviewed so many people, received loads of letters, ran quizzes, gave prizes and had a ball. My first job, with about three day’s notice, was to interview Loudon Wianwright the 3rd. I had never been this close to someone so famous never mind talk to them. I was such a fan and knew his work inside out but I did my research in Leeds City Library,(from books), and had as many of his LPs that I could lay my hands on…. and the day came. His P.A. took me to one side and said that I shouldn’t ask him about his age as he was very touchy about it. To be honest I wasn’t going to ask him about that at all, and the next thing I knew I was sitting opposite him and had a microphone thrust in my face and we started. It was like having a chat with an old friend as he could tell that I was very nervous and he put me at ease immediately and it went really well, (and I never asked him how old he was once.) As he was going he turned to look at me and said to the producer, “You’d better keep this guy. He’s got talent!”

On December 8th of 2019 I returned to do an interview and some 3 songs at Radio Leeds for the Durbervilles Folk and Roots show. It was a new building, a new age of digits, virtual recordings, flat screens, ingesting songs, meta data and file transfer protocols and not a chinagraph, fag or a razor blade in sight. At first it felt as if I was on the wrong side of the desk, as I had never played anything of my music when I was a presenter but I was treated so well by Dave and Lee Durberville. They’ve kept them….They’ve got talent.

Any cookies that may not be particularly necessary for the website to function and is used specifically to collect user personal data via analytics, ads, other embedded contents are termed as non-necessary cookies. It is mandatory to procure user consent prior to running these cookies on your website.